By divine institution, Bishops succeed the Apostles through the Holy Spirit who is given to them. They are constituted Pastors in the Church, to be the teachers of doctrine, the priests of sacred worship and the ministers of governance. By their episcopal consecration, Bishops receive, together with the office of sanctifying, the offices also of teaching and of ruling, which however, by their nature, can be exercised only in hierarchical communion with the head of the College and its members (Canon 375).

Providing pastoral governance for a diocese, bishops who fulfill this function are known as diocesan ordinaries, because they have what canon law calls ordinary (i.e. not delegated) authority for a diocese. Just as, by the decree of the Lord, Saint Peter and the rest of the Apostles form one College, so for a like reason the Roman Pontiff, the successor of Peter, and the Bishops, the successors of the Apostles, are united together in one (Canon 330).

Bio of the Roman Catholic Archbishop of Singapore

On 1 May 1985, he was ordained a priest in the Archdiocese of Singapore. He was Assistant Parish Priest in Church of the Holy Cross from 1985 – 1989. He then went on complete his Licentiate in Dogmatic Theology in the Pontifical Gregorian University in 1992.

Upon his return, he was initiated as Formator and Lecturer of the St Francis Xavier Major Seminary (SFXMS) from 1992-2005. In 2005, he was appointed Rector of SFXMS and Spiritual Director of the Catholic Spirituality Centre until he took office as Archbishop.

“What I hope for above all in my episcopacy is to be both an encouraging and supportive brother to my priests, empowering them in their ministry, and a compassionate and caring father to the laity.” – Archbishop William Goh

Two topics close to his heart include Families and Youths.

About the Roman Catholic Archdiocese of Singapore

The Roman Catholic Archdiocese of Singapore oversees a congregation of some 360,000 Catholics. The Titular head is the Most Rev. William Goh, Archbishop of Singapore.

The Archdiocese has 32 churches spread across 5 districts in Singapore. Aside from providing spiritual formation and pastoral care for its members as well as those in need, the Archdiocese, in communion with the Vatican, also carries out its moral and social responsibility by working in collaboration with like-minded partners and those in authority to preserve peace and unity and to ensure that justice and truth are available to all in our society. 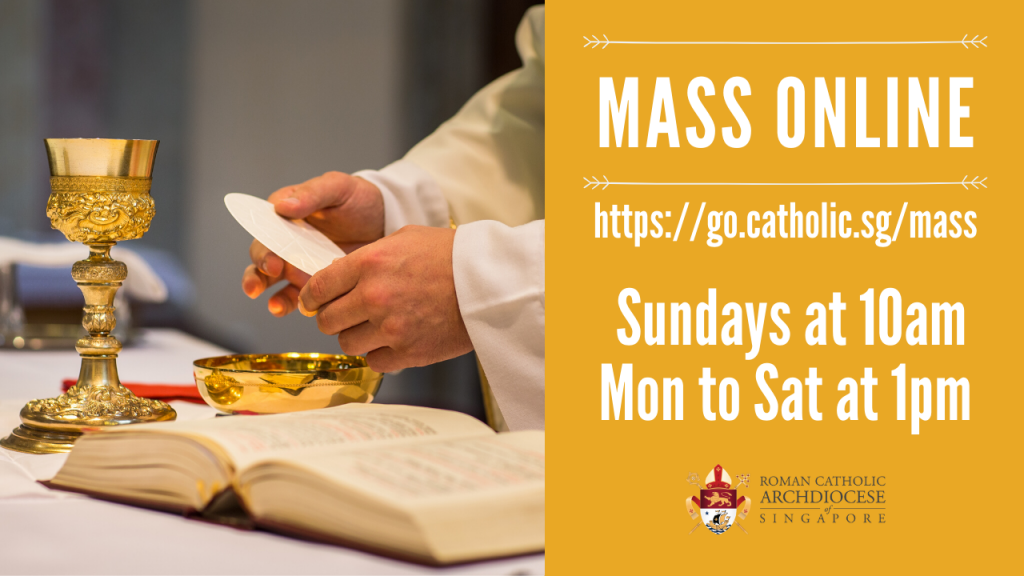 Have you ever wondered where is a convenient place online to search for Singapore Mass Times, Singapore Mass Schedules? Perhaps you are new to Singapore being tourist, wanting to check out the Christmas Mass Times or even Easter Mass Times?

Whatever your purpose is, we hope that this website proves to be useful in your search to locate that Mass Timings from the various Parishes of the various Districts in Singapore.

If you like Singapore Mass Schedules and find the information that we share useful please do share this with your friends so that more will know about us!  Thank you in advance!